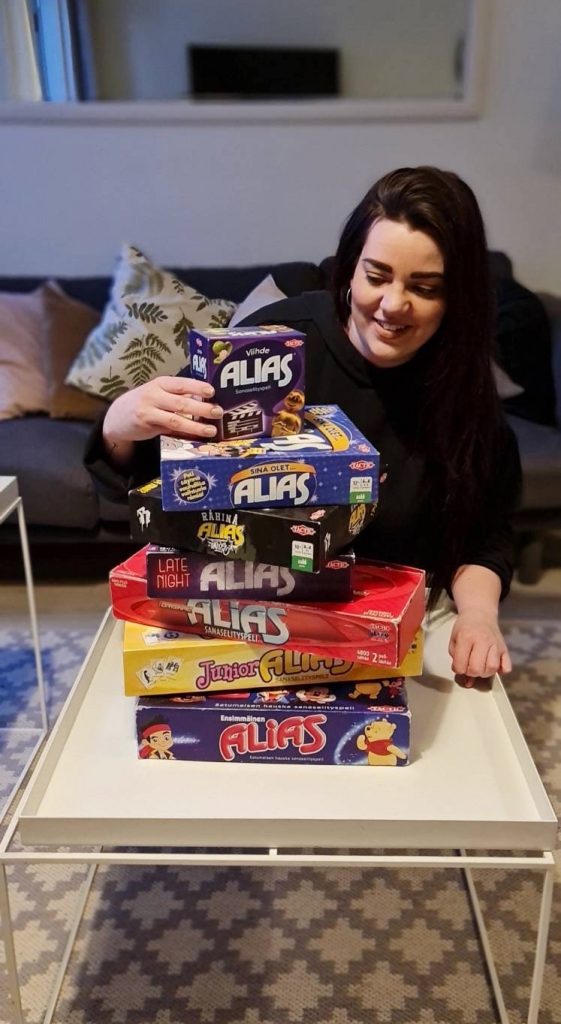 Alias board game has millions of loyal fans around the world. We talked to one of them to find out how Alias keeps people entertained year after year.

Manna Fransas is in her thirties and lives in Helsinki, Finland. Coincidentally, she is about the same age as Alias, published in 1981. Manna works at an ad agency as a copywriter and her hobbies include basketball. Manna’s immediate family consists of her two children, her partner and his daughter.

Manna recalls that she was still in primary school when she first played Alias with friends from her neighborhood. From day one Manna was drawn to Alias because it was fun, inventive and fast paced. Even though Manna plays plenty of other board games too, Alias has always been her number one choice. Words like energetic, daring, social, happy and humorous describe Alias pretty well – and admittedly her own bubbly personality as well.

Get the party started

When Manna leaves for a cottage weekend or skiing with friends, Alias is always packed along. Just before the Covid pandemic hit, Manna celebrated her 30th birthday with a big group of friends in Barcelona. With her, she had the Late Night Alias – a perfect adult party highlight.

Alias fandom has also spread to Manna’s offspring, and she has played plenty of board games with her children. Now her children can also play Alias together. Manna sees that Alias has many educational benefits: children’s vocabulary extends through play and they also learn necessary social skills, like losing. Manna still prefers to play Alias with her own friends – they offer a much needed challenge to the veteran player.

Manna has bought her fair share of Alias games during the years; the most popular ones are on their second sets already. In addition to the Original Alias, Manna’s game cupboard holds Junior Alias, Disney’s first Alias, You Are… Alias, Party Alias, Late Night Alias, Rähinä Alias (a Finnish exclusive) and Snack Alias Lights, Camera, Action. She has an ideal Alias version for every occasion.

Even though playing Alias is all about having fun, the will to win is genuine. Manna claims jokingly that she has never lost a single Alias game, but she admits that playing a lot helps. Especially with the Original Alias, the words are so familiar, that she always knows the quickest ways to explain them. That’s why Manna keeps buying new Alias versions, so she’ll have fresh words to explain.

All of Manna’s closest friends are pretty competitive, too. During Alias, emotions tend to heat up and sometimes an odd quarrel stirs up. Luckily, so far no friendships have been broken off because of Alias, and the winners are always happily rewarded with something like a bottle of bubbly.

There are also funny inside stories when friends play a lot together. For example one of Manna’s friend didn’t know the word mosaic, but instead explained the word mosque. This funny mistake still makes her friends laugh. So playing Alias can expand your vocabulary even as a grownup.

How to win Alias

In addition to verbal talent, Manna thinks that Alias also requires strategic skills. It is not the same how you explain the words, and whether you explain long words or praises in two parts or together. Here are Manna’s hot tips for winning Alias:

As an adult, the Finnish roots of Alias have become more important to Manna. She thinks it’s great that Alias represents Finnish talent and knowhow. Manna also has a big pile of other Tactic’s games, which are all made in their own factory in Finland.

If Manna could design her own version of Alias, she would add a novel surprise element to the game. In the D.I.Y. Alias, you can already come up with your own words, but an unexpected surprise, like a team change in the middle of the game, would add suspense for even the most experienced player. But would a sure win still be guaranteed?

Manna has a firm opinion on why everyone should play Alias. It’s fun yet educating. It builds team spirit and cooperation skills. It’s easy to learn and anyone can play it. You can never get bored, because every player and play session is different. A perfect entertainment package, indeed.

Explore the selection and find your favourite Alias! 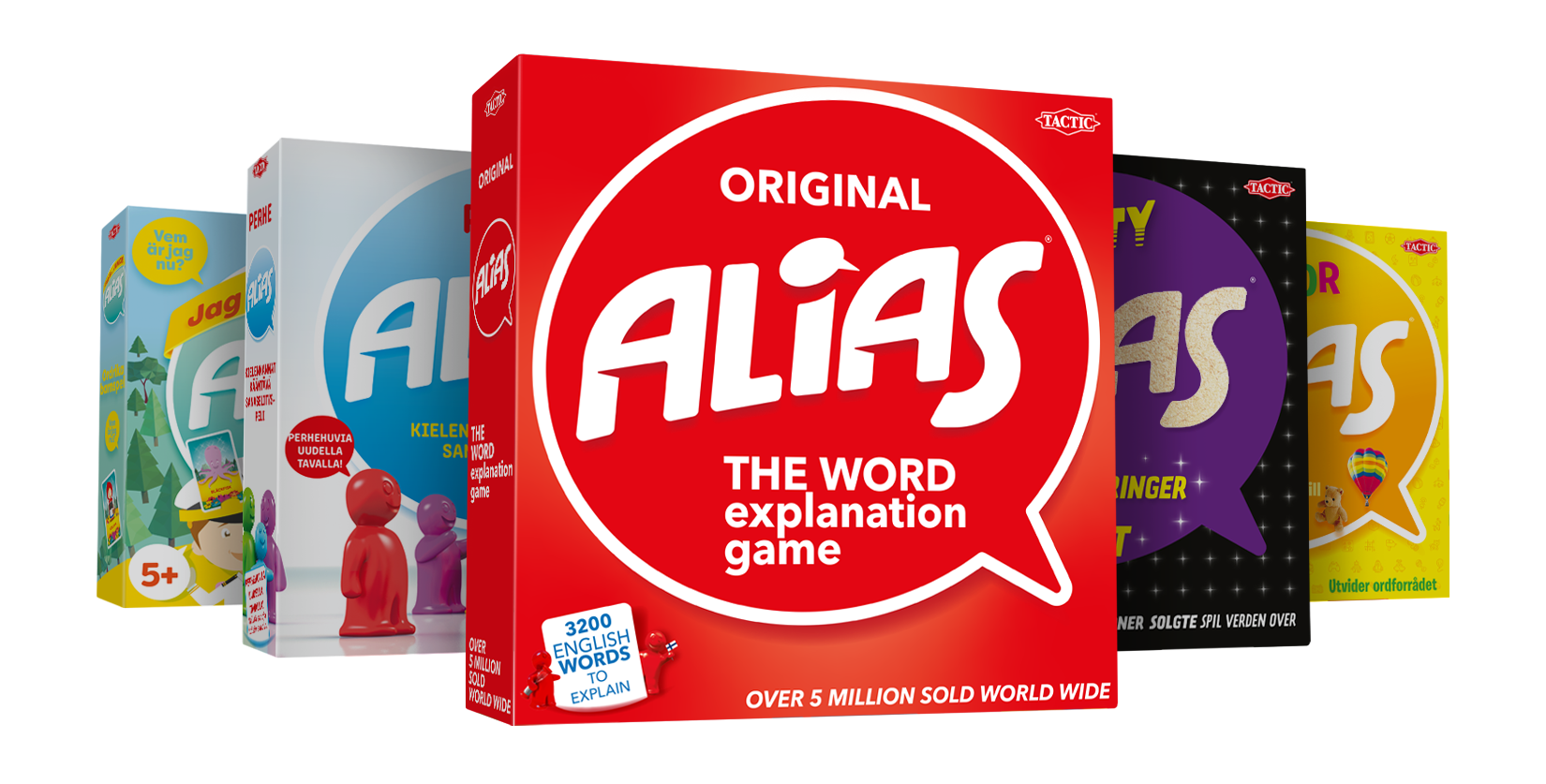 The word explanation game Alias was invented in Finland three decades ago. Back then, so called ”party games” were few and far between in the Finnish market. Tactic Games, previously Nelostuote, decided to create and publish a game based on the product idea. Tactic began to manufacture Alias in its own game factory in Finland.

The chairman of the board of Tactic Games Markku Heljakka looks back on the early stages of the game,

”A new game concept was offered to us, and after a few test play rounds the management of the time decided to invest in it and create a product out of it. The first print run consisted of 3,000 copies. The design emphasized family fun and Finnishness, and the models on the cover were wearing shirts by Marimekko. The game box was rectangular, which was quite uncommon when it comes to board games.”

Alias quickly became a hit and its success story continues today. The games represent high Nordic quality and are manufactured from sustainable and recycled materials in Pori, Finland. Today the Finnish word explanation game brings joy to players all around the globe — Alias has its biggest markets in the Nordics, Russia and Central European countries such as Czech Republic for example.

”The Alias product family is one of our flagships. The sales have grown organically in all markets. We export Alias to 40 different countries and there are almost 30 different language versions available, including Chinese, Korean and Icelandic to name a few. Alias clearly has some magical qualities, because players make it come alive all around the world,” states Juha Nieminen, the CCO of Tactic Games.

”Based on sales and compass points, someone in the world is playing and enjoying Alias right now. They’re explaining and guessing words, laughing and spending time with friends thanks to our game. How amazing is that!” Nieminen adds.

The Alias product family has grown over the years. It contains entertaining and unique word explaining games for players of all ages. Alias games are constantly evolving and offer a fantastic mix of both traditional and fresh new words for the players to have fun with. Educational professionals also use Junior Alias to broaden the vocabulary of their students.

In 2020 all Alias games get a new and fresh look and some of the content is also updated.

”The Alias product family has grown over the decades and gained international success. To celebrate the anniversary, we have given the games a new, contemporary look, updated the content and added some digital features. You will see a lot of Alias in the media during the autumn,” says Jemina Heljakka, the CMO of Tactic.

According to the designer responsible for the renewed look, the aim was to strengthen the identity of the brand and the message of the game box. Now the Alias logo text design is much more airy and dynamic.
The dot in the “i” of the word Alias is now shaped like a speech bubble.

”That’s what this game is about – speaking. The speech bubble symbol has been around since the 13th century and now different digital communication platforms have made it topical again,” says Tactic’s designer Jussi Lindberg.

Lindberg thinks that the message of the box design is simple and effective. It also works well on digital platforms. 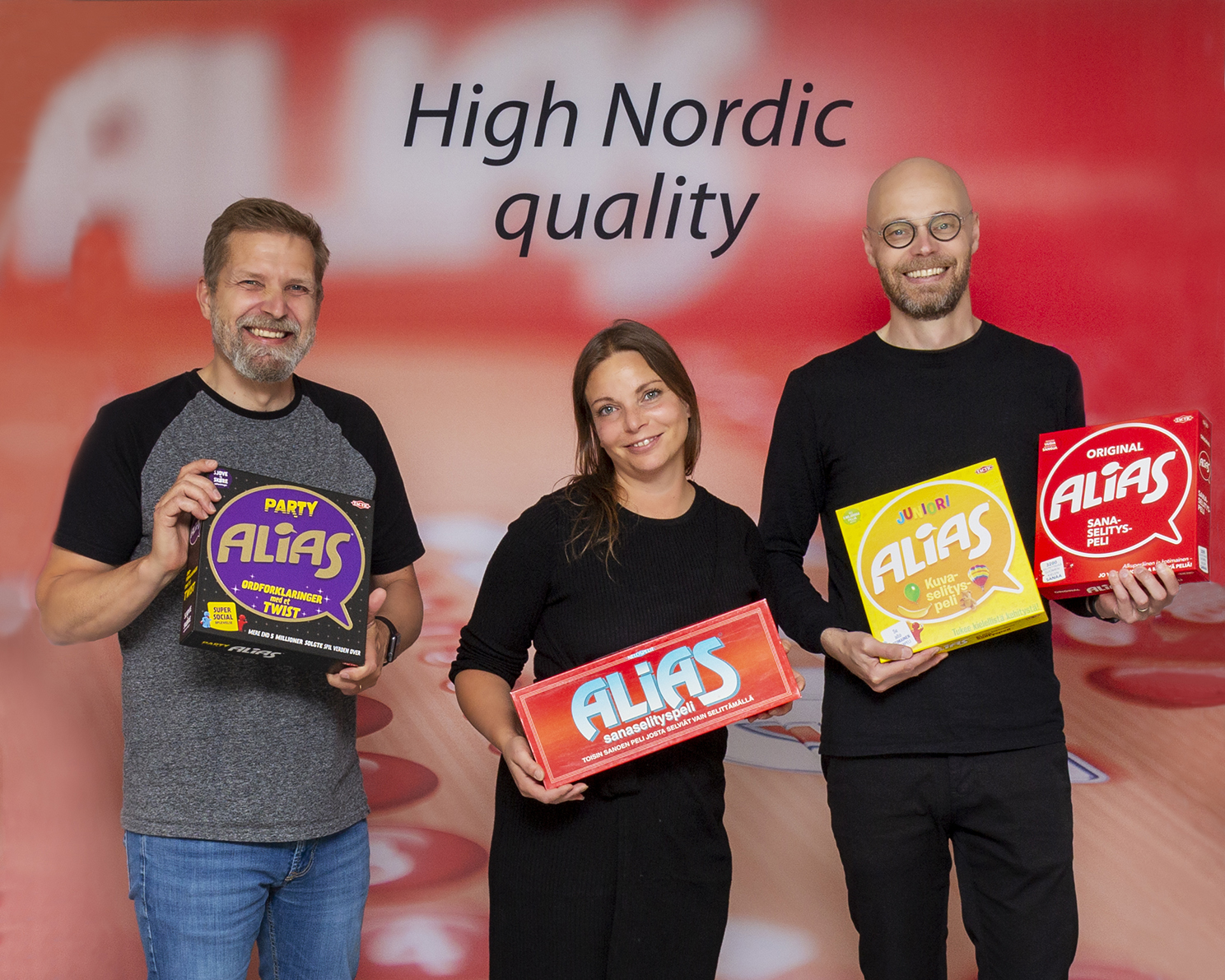 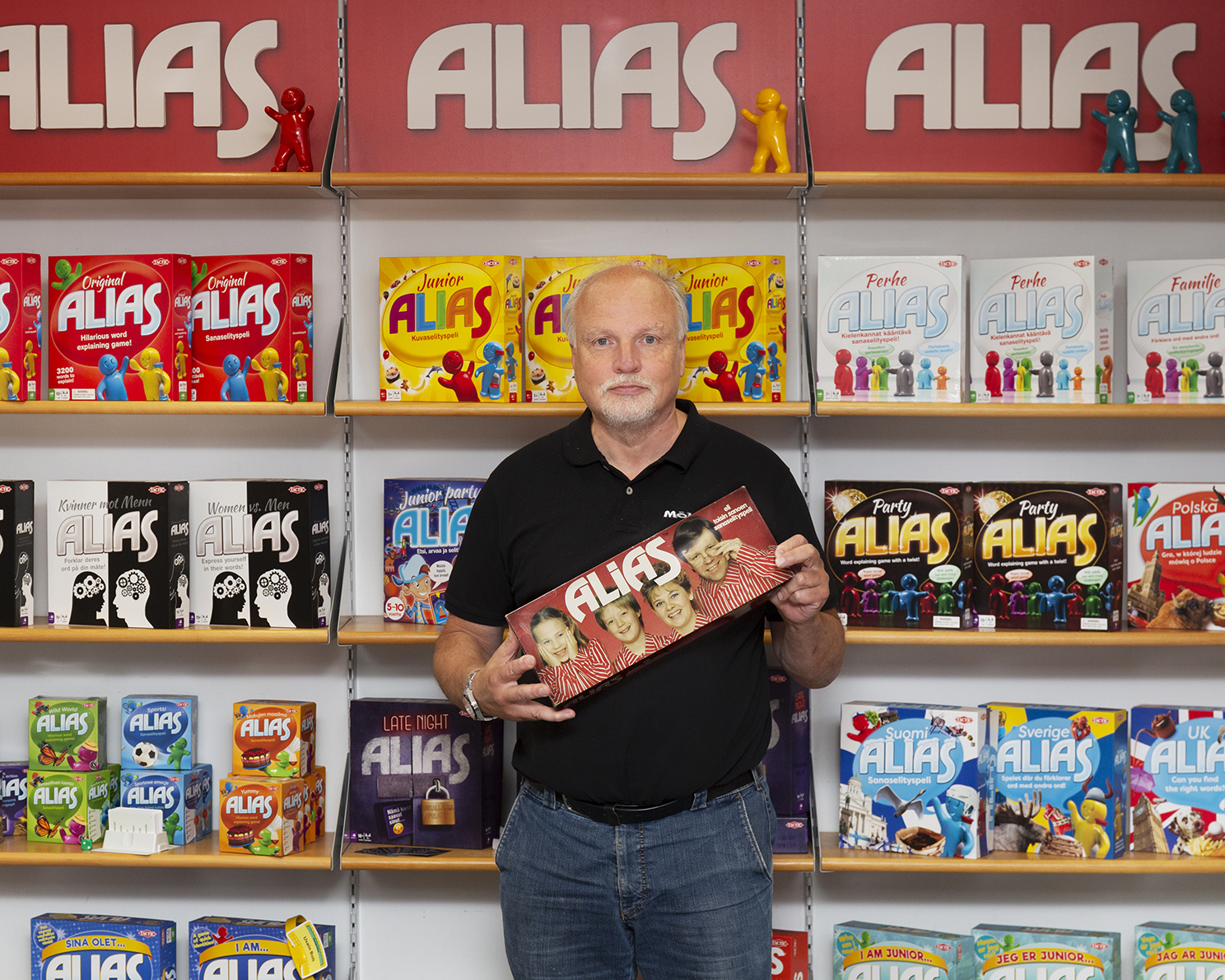 Markku Heljakka and a copy of the first Alias

Juha Nieminen with the renewed Party Alias, which will hit the stores in the autumn. Jemina Heljakka is holding a copy of Alias from the 90s. Jussi Lindberg with the renewed Junior Alias and Original Alias.

Alias games have been manufactured in Finland for 30 years. Alias is Finland’s most well-known and top-selling party game internationally. It is sold in over 40 countries. Over 6 million Alias games have been sold worldwide and the product family grows every year. In 2020 the family got a new, fantastic member called DIY Alias! 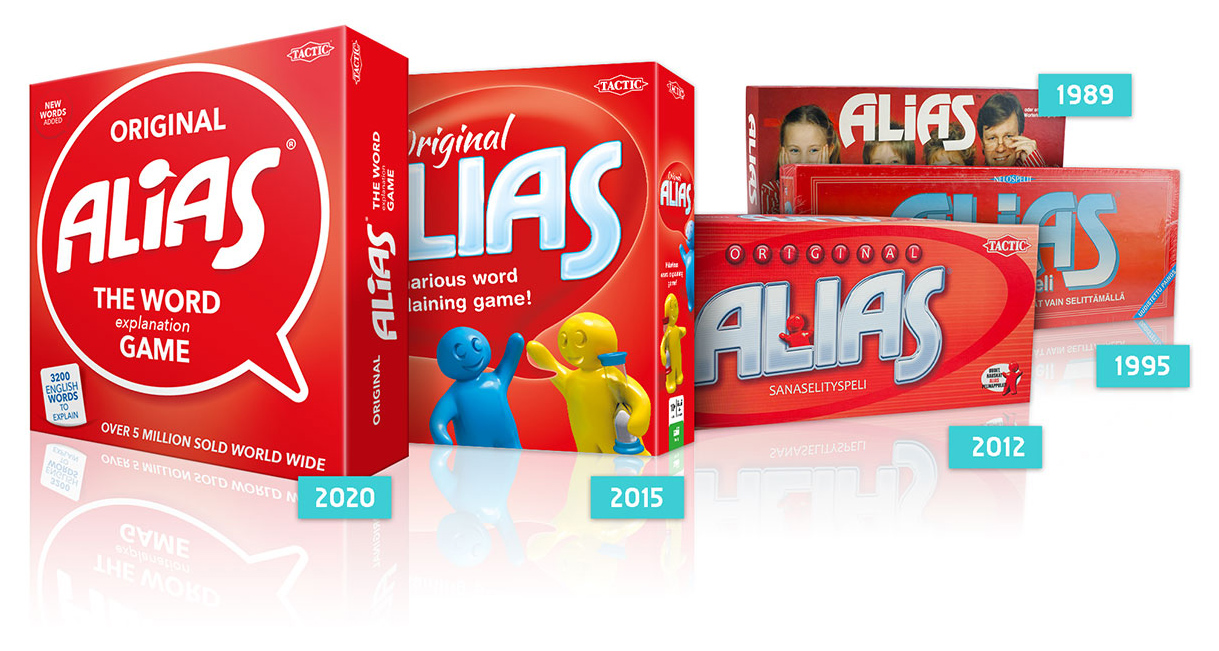